Established in 2001, Aussie Outback Safaris is one of the longest running family-run Tour Operator’s in West Australia. Originally, run as a regular weekly 4-day back-packer trip to Monkey Mia, we now focus on group tours, specializing in taking groups of exchange students to Shark Bay, or the Ningaloo Reef.

We also offer more exclusive tours, which we can tailor to meet the needs of smaller groups, or families. We continue to offer a regular weekly tour, by teaming up with Red Earth Safaris. Owned by Terry Ramsay, this is one of the very few family companies that continue to thrive, running a weekly 8-day tour from Perth, to Coral Bay, Exmouth, and the Ningaloo Reef, visiting the Shark Bay dolphins of Monkey Mia along the way.

Unlike our competitors, who have a very high turnover of drivers and guides, and inevitable issues with consistency and quality, Red Earth Safaris, which have a much less demanding itinerary, have used the same drivers and guides for many years. Consequently, we have a depth of knowledge, passion and expertise of the region, and offer a personal touch that cannot be matched elsewhere. 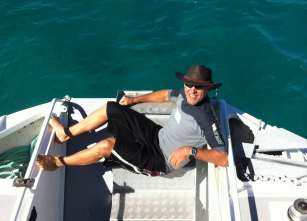 Owner of Aussie Outback Safaris is Paul Heyes. Paul continues to share his passion and enthusiasm for the Coral Coast with travellers. Supported with his knowledge acquired during his 10-years as a Geography Teacher; and taking resource industry field trips into the remote Australian Outback, with Dr Philip Playford.

He was also a key member of the party who discovered the Dutch wreck the Zuytdorp, the story of which is captured in his book “Carpet of Silver”.


The opportunity to access this rare knowledge on these trips has been invaluable. Over the past decade or so, Paul has managed to successfully mix his passion of the West Coast Outback with range of sporting adventures: ridden his mountain bike, unsupported, across Australia’s remote Cape York peninsula; competed in the world’s highest ranked mountain bike stage race, the 8-day Cape Epic, in South Africa; finished several Ironman Races, including the most iconic single day endurance race on the planet, the Hawaiian Kona Ironman; and represented Australia at cycling in the UCI Amateur Road Races, in Belgium.

More demanding than all these was competing in the Australian equivalent of the famous Dakar motorsport event, the Australasian Safari, which involved racing 5,000 kilometres in a 8-days through the harsh outback on a Suzuki 400cc motorbike.